Positivo Tecnologia is a technology company founded and based in Brazil that offers a complete line of devices, including desktops, all-in-one computers, notebooks, netbooks and tablets, produced in factories in Manaus (AM) and Curitiba (PR). Since 2012, the Company has also been active in the mobile phone market, offering smartphones and feature phones, as well as being one of the few companies in Latin America to have MADA certification for Android development. A substantial share of Positivo Tecnologia‘s device production is sold through large retail chains, with which the Company maintains a solid business relationship, mainly due to its competitive prices, the quality of its computers, its wide technical support network and its recognized ability to customize its products based on the wishes and needs of Brazilian consumers.

Another portion of the Company‘s revenue comes from the Educational Technology area. The Company offers infrastructure and management solutions, educational apps and platforms, education portals, teacher training and educational support. Positivo Tecnologia‘s educational solutions are present in over 14,000 schools and are exported to over 40 countries. Our main products include educational tables, mobile devices, interactive whiteboards, storage and charging devices, projectors, access points, and class management systems. The Company is the exclusive distributor of leading educational software development and distribution companies in Brazil, and it also distributes LEGO® Education products nationwide. Positivo Tecnologia was born in May 1989 from the Positivo Group, one of the largest education groups in Brazil, with the initial goal of manufacturing and selling computers to Positivo Group client schools all across the country.

In 2017, the Company changed its name from Positivo Informática S.A. to Positivo Tecnologia S.A., in order to align its corporate name with the company‘s purpose and essence, reflecting its business diversification initiatives, moving towards a broader and more up-to-date concept, with a varied portfolio of brands, target audiences and business segments.

In this new phase, we incorporated new technologies into our portfolio, both organically and inorganically, ranging from medical technology to agritech, from servers to hardware as a Service (HAAS) and from the major Internet of Things project – Positivo Casa Inteligente to new initiatives in educational technology.

In 2018, the Company entered the server market through the acquisition of 80% of ACC Brasil Indústria e Comércio de Computadores Ltda. (“Accept”), which manufactures and sells servers and storages, as well as client solutions such as Mini PCs, thin clients and desktops. The acquisition of Accept expanded the Company’s portfolio in the corporate and government bid markets at a time when the Brazilian economy began to recover.

Also in 2018, Positivo Tecnologia opened its first Private Equity Investment Fund (FIP), as a sole shareholder. This vehicle will concentrate the Company‘s future investments in technology-based companies, which will receive part of the R&D investment obligations required by the IT Law, in line with the new regulations issued by the federal government, in return for tax incentives offered to IT companies.

The Company’s net revenue is generated by operations in the retail, government and corporate segments.

The following table shows the breakdown of net revenue by segment:

The following table shows the breakdown of accounting net revenue:

The Company’s portfolio comprises desktops, notebooks, tablets, mobile phones and servers, with operations in the retail, government and corporate markets.

Retail Segment. In retail, we distribute our products in physical and online stores of the main Brazilian retailers (including tier-1 distributors, such as Carrefour, Magazine Luiza, Fast Shop, Via Varejo, Extra, Cnova, Walmart, B2W and Lojas Americanas, tier-2 distributors, such as Pernambucanas, Koerich, Bemol, Grupo Mateus, Lojas Cem, Zenir Móveis, Fujioka and Riachuelo, and tier-3 distributors, such as Infoeletromix, Mundial Magazine, Haikai, Techstore, Koisa Nossa, Avenida Cell and Planeta Eletrônicos); however, our exposure to small retailers is still limited, which represents an opportunity to drive the Company‘s growth strategy. In 2019, physical stores accounted for 74.5% of retail sales, while the online channels contributed the remaining 25.5%.
Sales Percentage by Retail Tier 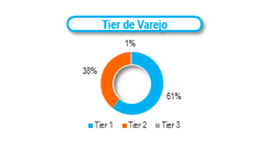 Government Bid Segment. In terms of the supply of computers to the public sector, we dominate the government bid market, especially between 2012 and 2015, when there were several bids from the Ministry of Education through the National Education Development Fund, although the Company has been operating in this market for more than 25 years.

iCorporate Segment. In the corporate market, we sell our products on a large scale to companies; our market penetration in this niche has grown substantially in recent years compared to historical figures. Our market share went from 2.2% in 2010 to 8.2% in 2018.